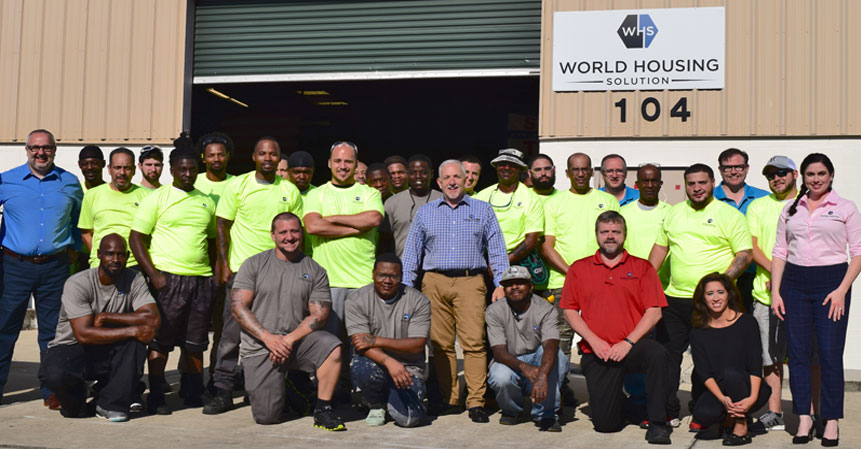 INC500, Fast50, and GrowFL Award World Housing Solution in 2019 with Accolades for Growth and Ingenuity

2018 and 2019 Continue to be banner years for World Housing Solution, Inc. and the Central Florida Community has generously recognized their contributions.

Based in Sanford, Florida, since 2011, World Housing Solution, Inc. is a leader in the innovative, Rapidly Deployable Structures (RDS) that serve the multiple divisions of the U.S. Military, FEMA, The Salvation Army, and many others. Their commitment to the Central Florida community and humanitarian causes is receiving great attention in the media. As a result, World Housing Solution, Inc., continues to receive accolades fro its growth, innovation, and more.

These accolades include the following:

World Housing Solution, Inc. Named as One of GrowFL’s 50 Companies to Watch in 2018 

World Housing Solution Inc., has earned a place on its list of 50 statewide companies expected to see significant growth over the next several years. These 50 companies ere selected from more than 500 nominees for Florida Companies to WatchSM - a statewide program managed by economic development group GrowFL, in association with the Edward Lowe Foundation.

World Housing Solution’s management team, competitive market position and strong community involvement were among several factors that put them in contention for the award.   “We are so proud to be among so many great companies in the state of Florida”, said Ron Ben-Zeev, founder and CEO of World Housing Solution. “At World Housing Solution, we pride ourselves on focusing on the customer’s problems, rather than pushing out solutions that we think are the best, and that has helped us grow more than we ever thought possible.”   The 50 companies named the 2018 Florida Companies to Watch generated nearly one billion dollars in revenue and added nearly 1,000 jobs between 2014 and 2017. Together, the companies project a 50 percent increase in revenue and 40 percent increase in yearly job growth. “This is a strong group of companies that deserve this special recognition given annually to the state's top second stage companies,” said Dr. Chris Morton, GrowFL Chairman of the GrowFL Advisory Board, CEO of NanoPhotonica and a 2015 Florida Companies to Watch honoree. Second-stage companies are defined as those with 6 to 150 full-time employees and between 750,000 dollars and 100 million dollars in annual revenue. There are many programs and incubators promoting start-up businesses; GrowFL is the only Florida program that focuses exclusively on second-stage companies. “These stand-out companies are all led by entrepreneurs, and have demonstrated their capacity and intent to grow,” said Dr. Tom O’Neal, GrowFL executive director.  “They also all have critical intellectual property or a niche position that gives them a competitive edge in their markets,” he said.

World Housing Solution Inc., was recently recognized as one of Central Florida’s fastest-growing privately-owned companies by the Orlando Business Journal. The 50 firms were chosen based on the rate of revenue growth from 2016 to 2018.

“We’re honored to be included on this competitive list of Central Florida’s fastest growing companies next to many successful organizations that are driving economic growth,” said Ron Ben-Zeev, founder and CEO of World Housing Solution. “This is validation for all the work our team has put in to growing the company, and we will continue to push ourselves further during the next steps of our journey.” World Housing Solution ranks second on the 2019 list. The company creates composite structures for the U.S. military and delivers these long-lasting buildings to units stationed in bases and forward operating camps in the U.S. and overseas as a more versatile, cost-effective and safer alternative to legacy construction. Recently, the company expanded its solutions by establishing a Mobile Response Unit division to help displaced victims of natural/manmade disasters who may not have access to medical care. In 2018, World Housing Solution ranked number 444 in Inc. Magazine’s 5000 Fastest Growing Companies. It ranked sixth overall in manufacturing, making it the fastest-growing manufacturer in the state of Florida. The company was also selected as one of the 50 Florida Companies to Watch in GrowFL’s 2018 annual list.